John, Maurice and Douglass Steiger, the father and sons who built the first Steiger articulated 4wd tractor more than 60 years ago, have been inducted into the Association of Equipment Manufacturers’ Hall of Fame, the North American organisation’s acknowledgement of contributions made to the development of productive agriculture through engineering advancement. The recognition comes as celebrations begin to mark 50 years since manufacturing of Steiger tractors began in Fargo, North Dakota, USA, the city where production remains today. The business became part of Case IH in 1986, and since 1996 Quadtrac tracked articulated variants have been produced in Fargo alongside Steiger wheeled models. 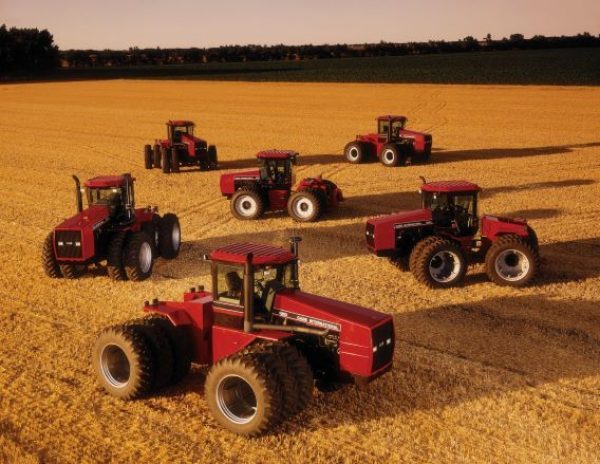 The AEM Hall of Fame was founded in 2008, since when it has honoured pioneering individuals who have invented, managed, built and led the off-road equipment industry. In doing so, it strives to instil a deeper public understanding and appreciation for the continuing role of the industry in global business success and continued growth for modern standards of living, says the AEM. Inductees to the Hall of Fame must exemplify five guiding principles: innovation, industry contributions, leadership, corporate citizenship/social responsibility and sustainability.

The first Steiger tractor was built during the winter of 1957-58, when John Steiger and sons Maurice and Douglass sought to improve the timeliness of operations by raising workrates when performing key field tasks on their farm in Thief River Falls, Minnesota. While most high-end tractors of the time were two-wheel drive and offered less than 100hp, the Steiger family decided to create a machine offering more than double that output, incorporating more robust components, four-wheel drive with equal-sized wheels and articulated steering for good manoeuvrability. Nicknamed ‘Barney’, the first Steiger tractor, painted a distinctive lime-green, had a power output of 238hp.

When neighbouring farmers began to notice the machine at work, they asked the Steiger family to build them something similar, and after designing an additional 118hp model a full series of 150-300hp Steiger tractors was put into production in converted farm buildings. Outside investment in the business saw manufacturing move in 1969 to full factory premises in Fargo, North Dakota, where the first of the famous ‘cat-named’ models, the Wildcat, began production. This facility was soon outgrown, and in 1975 work was completed on a new factory, also in Fargo, where Steiger production remains.

Since Steiger became part of Case IH in 1986, the legacy of the founders and the principles of the products they created have continued to be an inherent part of Case IH Steiger and Quadtrac design, with the two brand names have long been synonymous with innovation in wheeled and tracked articulated high-horsepower tractors. In 1996, Quadtrac was the first four-tracked high-horsepower tractor to enter the market, while both Steiger wheeled and Quadtrac tracked models were the first of their respective types to offer the operating and fuel-saving benefits of continuously-variable transmission technology, with the addition of a CVXDrive option.

“We have continued to evolve the Steiger product, just as the the Steiger family did,” points out Dan Stuart, Product Marketing Director for Case IH Europe, Africa and Middle East.

“And in the same way we have stayed true to the principle of providing customers with solutions to their challenges around the world. Very few tractors can claim to be operating on all seven of the world’s continents – including the Antarctic – or have twice taken the world ploughing record, providing clear evidence of Steiger’s continued focus on rugged design and adaptability”.