SPICED APPLE, PEAR AND CRANBERRY CHUTNEY
Makes about 750ml
This chutney is ideal for a cheese board and is also perfect to serve alongside cold meats.
A bottle of this chutney makes a great hostess gift.

Heat the olive oil in a large pot and gently fry the onions for about five minutes until softened but not coloured.
Add all the remaining ingredients and stir over a medium heat until the sugar has dissolved. Bring to simmer and cook for 30-40 minutes until the fruit is soft but not mushy and the mixture has thickened. Remember that the mixture will thicken on cooling.
If the mixture thickens too quickly before the fruit is soft add more apple juice.
Remove from the heat and spoon into sterilised jars and seal while hot.

Boil the potatoes until tender, drain and then halve them.
Heat the olive oil in a pan and fry the sausages until cooked, drain on paper towel and cut each one in half diagonally.
Boil the Edamame beans in water for five minutes then drain. Remove the beans from the pod.
Put the rocket into your serving dish and arrange all the ingredients on top.
Pour over the dressing and toss to combine. Serve immediately.
DRESSING: Combine all the ingredients in a screw-top jar and shake well to combine. 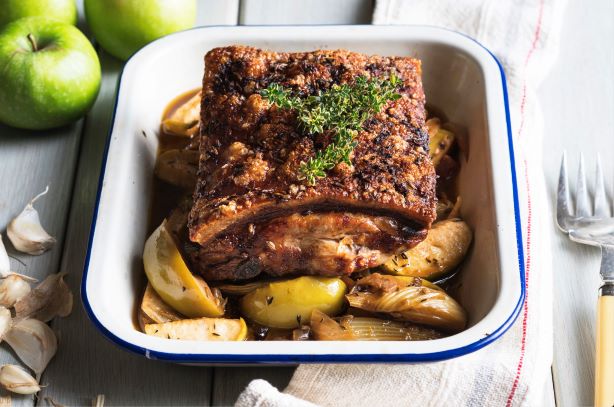 Wipe the meat with paper towel and if possible leave open in the fridge overnight.
Bring the meat to room temperature when ready to cook.
Preheat the oven to 200C.
Cut the fennel into 4-6 wedges, depending on their size. Peel and cut the onions into thin wedges.
In a roasting tin combine the fennel bulbs, onions, tomatoes and garlic. Drizzle over olive oil and half the fennel seeds. Season well and toss to combine.
Place the pork skin side up on top of the vegetables. Drizzle the skin with a little olive oil, sprinkle over the remaining fennel seed and a generous sprinkling of salt. Place in the oven and roast for 30 minutes. Remove from the oven and add the cider and stock, make sure the liquid does not come in contact with the skin.
Lower the oven temperature to 160C and return the roast to cook  for another two hours, make sure the liquid does not evaporate, top up with stock if necessary.
Add the apples and return the meat to the oven for a further 30-40 minutes until apples are tender but not mushy.
If the top has not formed nice crackling, place the meat under a heated grill for a few minutes.
Remove from the oven. Take off the crackling if desired to cut and serve separately. Cover meat with foil and rest it for about 10 minutes.
Spoon the apple and fennel mixture onto a serving platter. If there are a lot of pan juices left then simmer for a few minutes to reduce and thicken.
Slice the pork and serve it on top of the apple mixture with the  pan juices and crackling.

These are so moreish and are best served warm.

FILLING: Put the diced apple, lemon juice and castor sugar in a small pot and cook gently until the apples are tender, remove and allow to cool completely.
Combine the softened butter, sugar and cinnamon and mix well. Set aside.
DOUGH: Put the flour, salt castor sugar and baking powder into the bowl of an electric mixer. Add the butter and using the paddle attachment mix until the butter is combined into the dry ingredients and it resembles breadcrumbs. Combine the eggs and buttermilk and add to the dry mixture. Mix until it forms a dough that is soft but not sticky.
Turn onto a floured surface and knead lightly to form a smooth dough.
Roll out into a rectangle. Spread with the butter mixture and sprinkle over the apples.
Roll up from the long side tor form a tight roll. Cut into 12 equal portions. Place each into a well greased muffin tin. Bake at 180C for 25-30 minutes until golden brown. Remove and stand in the tin for 5 minutes before  placing on a cooling rack. Drizzle  generously with the glace icing while still warm. Delicious served fresh and warm. 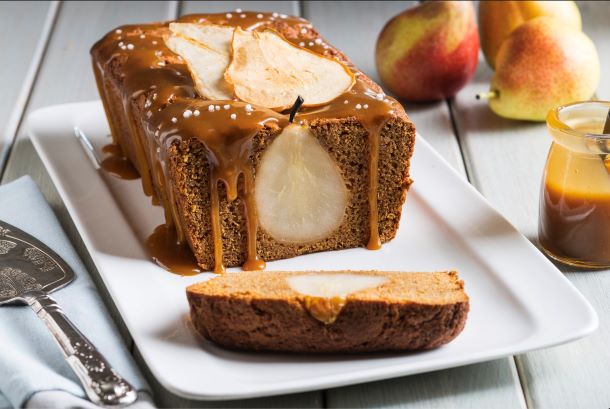 The rind of an orange removed with a potato peeler

CAKE BATTER
125g butter
180ml light brown sugar
125ml golden syrup
125ml molasses
2 extra large eggs
180ml Greek yoghurt
10ml grated fresh ginger
500ml self raising flour
10ml ground ginger
5 ml ground cinnamon
5ml mixed spice
3ml ground nutmeg
SALTED CARAMEL SAUCE
100g butter
125ml treacle brown sugar
160ml fresh cream
60ml golden syrup
Pinch of sea salt flakes
PEARS: Peel the pears leaving the stalks intact.
Dissolve the sugar in the water in a small pot just large enough to hold the pears. Add the cinnamon, star anise and orange rind. Bring to a simmer and add the pears making sure they are submerged. Cover and simmer until the pears are just tender, about 15 minutes. Don’t let the pears get too soft or they may not hold their shape while baking. Remove the pears and cool  completely. This can be done well in advance.
CAKE:
Cream the butter, sugar, syrup and molasses in the bowl of an electric mixer until light and fluffy. Add eggs one at a time, beating well after each addition. Add the grated ginger and yoghurt and mix to combine. Sift the dry ingredients and add to the creamed mixture beating until well combined. Cut a piece of baking paper to fit the base and up the short sides of a 15x 25cm loaf pan. Spray well with non stick cooking spray.
Spoon the batter into the tin and push the 3 pears into the batter.
Bake at 170C for 40-50 minutes or until a toothpick inserted into the cake comes out clean. Remove from the oven and allow to cool in the tin. Carefully remove and place on a rack. Drizzle with the sauce. Reserve some of the sauce to serve separately.
SALTED CARAMEL SAUCE:
Combine all the ingredients in a small pot and stir a medium heat until mixture comes to the boil. Simmer for about five minutes until slightly thickened. Remove from the heat and cool. Taste to see if it has enough salt.

NOTE:
As an alternative this can be baked as a pear upside down cake.
Peel and core 3-4 pears and cut them into thick wedges. Sprinkle 60ml of brown sugar onto the base of a 22cm cake tin which has been lined with baking paper. Drizzle over 80ml melted butter. Arrange the pears over the sugar mixture. Pour the batter over the pears. Bake at 170C for 40-50 minutes or until a toothpick inserted into the cake comes out clean. Remove from the oven and cool in the tin for 10 minutes before carefully turning onto a cooling rack.

PEARS:
Peel the pears leaving the stalks intact.
Dissolve the sugar in the water in a small pot just large enough to hold the pears. Add the cinnamon, star anise and orange rind. Bring to a simmer and add the pears making sure they are submerged. Cover and simmer until the pears are  tender, about 15 -20 minutes.
Remove the pears and cool completely. Cut each pear in half and carefully remove the cores. Drain the pears on paper towel. Bring the remaining syrup in the pot to the boil and simmer until reduced and thickened. Remove and cool. This can be done well in advance.
FRANGIPANE:
Place all the ingredients into a food processor and process to form a smooth mixture.
Unroll the puff pastry onto a floured surface. Roll out slightly. Using the poached pears as a template, cut out a pear shape about 5mm larger than the pear half. Score a border 5mm in from the edge of the pastry taking care not to cut all the way through the pastry. Prick the inside with a fork. Spread the inside with a spoonful of the frangipane mixture. Chill well before baking.
When ready to bake, remove the pastry from the fridge. Place a pear half on top of the frangipane on each piece of pastry. Brush the edges of the pastry with egg glaze. Brush each pear half with some of the reduced syrup.
Bake at 180C for 25-30 minutes until the pastry is risen and golden. Remove and brush each pear with some melted apricot jam. Serve the tarts slightly warm with a spoonful of mascarpone cheese.