Africa’s failure to successfully mitigate tick attacks and diseases has had a negative outcome as far as livestock productivity is concerned. This is so because ticks do not only weaken the hosts by sucking their blood, but also act as major disease carriers between various species of animals. According to research, there are currently over 13 different tick families and more than 650 different kinds of ticks in Africa. All of these suck blood. Moreover, when occurring in numbers, they can kill livestock by sucking blood alone.

Diseases caused by ticks are not only dangerous, but also result in the use of very poisonous acaricides. Long term use of the acaricides also becomes futile since ticks tend to develop resistance especially when not applied appropriately.

Furthermore, the routine use of poisons and medicine is unacceptable in organic farming. As such other ways of preventing the diseases should be sought after.  Nevertheless, in some situations and under certain circumstances it can be relevant to use acaricides. Even under organic farming conditions, we sometimes have to acknowledge the fact that we are confronted with highly deadly diseases that can take away the fundament for the livestock production on a farm or in an area.

At the same time, it is also very important to be aware of alarming facts like how the blanket use of acaricide can worsen the situation because it creates susceptible animals. That being said, the development of resistance can lead to useless acaricides in some years. This will in turn necessitate the development of other ways and methods.

Ticks carry deadly diseases, and are therefore referred to as ‘vectors’. As such, the control of ticks and tick borne diseases would require a thorough understanding of their nature. This understanding can help making a strategy to avoid these diseases.

The difference in types of ticks and tick borne diseases comes in the consideration of how they are geographically spread, whether they are dose-dependent or not, and whether they only affect one animal species or more. On the other hand, there also important similarities between the different parasites and the host-parasite relations. This knowledge has its importance when it comes to tick management.

There are two main families of ticks the affect livestock in East Africa: soft and hard ticks.

Soft ticks and their control

The soft ticks are a big problem for poultry and other small stock.  They are usually fairly small. Their mouth parts are also not easily seen as they sit on the underside of the tick. Their backs also lack the hard back shield that the hard ticks have.

The main damage of soft ticks is that they suck the blood of livestock – and when they are many the amount of blood sucked will cause animals to become anaemic, get tired and unproductive. For poultry and other small stock this can be a very serious problem, greatly affecting health and productivity of the animals.

The spreading ashes or diatomite in nesting sites and areas where the birds dust bathe has been proven to be a rather successful control measure. Moreover, dry leaves of Lantana, eucalyptus, neem, pyrethrum and tephrosia added to the ashes and or diatomite in nests and dustbath areas will further reduce numbers of soft ticks.

Hard ticks and their control

The main disease carriers are the blue/ cattle tick. This is a major family with many species, each of which have different geographical distribution. The blue tick is instrumental in transferring both Anaplasmosis and Babesiosis which are both major diseases of cattle in East Africa.

The brown Ear tick’s preference goes without saying. This is in addition to its affinity for the areas under the tail as well. Iy is responsible for transferring East Coast Fever (ECF) in cattle and Nairobi Sheep disease. Amblyomma ticks transfer Heartwater disease. Hyalomma ticks transfer Sweating sickness of calves/cattle.

Breeding for tick resistance: Use primarily local breeds which are more resistant than exotic breeds, or cross breeds.

Hand picking of ticks, which can be done weekly or even twice per week, depending on the problem. During removal, ensure you remove the entire tick and not just the lower body. Also, as a point of caution, throw it immediately into the fire where it will not have the chance to jump onto another animal.

Furthermore, dusting with diatomite or in desparate cases with dusting powder recommended by the vet containing acaricides. Spraying with tephrosia leaves. Tephrosia has an effect like a ‘natural acaricide’ and can kill ticks. Spraying can also be done with a knapsack or similar device.

Cattle Dips are well known in East Africa as there used to be public dips in villages where farmers could take their animals for dipping at regular intervals. However this service seems to have mostly disappeared. Large scale farmers still construct dips for their herds as it is an efficient and labor saving way of controlling ticks. 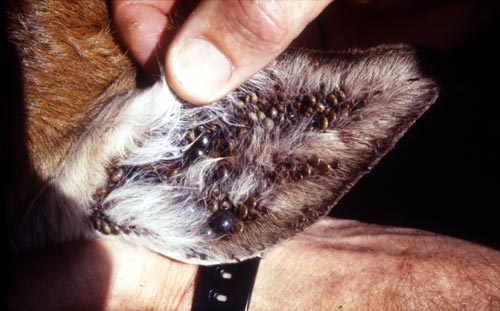